Just in time to take advantage of nature's bounty of fresh fruits, vegetables and greens this season! Fiorella has released her newest Living in Italian recipe e-book: Salads of Southern Italy! Salads have long been perceived as "rabbit food" or a symbol of dieting and deprivation, but Italian-born Registered Dietitian Fiorella DiCarlo shows you that salads the Living in Italian way can deliver bold flavors and satisfaction! In her new e-book, Fiorella shares her fool-proof r

The aroma of citrus groves fills the air in Southern Italy. From lemons and bergamot oranges of the Amalfi Coast to the famous blood oranges of Sicily, citrus fruits are staples of Italian cuisine. Another staple of Italian food is finocchio, or fennel, is grown throughout the country and common in many Italian dishes. Italians love adding a hint of anise flavor and use the entire fennel, from the delicate fronds to its dried seeds. Pairing the juicy, aromatic tang of citrus

Baked Apples Worthy of the Goddess of Love Aphrodite & Your Kids

Apples have long held an important place in ancient mythology. From the golden apple of the Trojan War to the three golden apples Aphrodite gave to Melanion, a suitor of the huntress Atalanta, this fruit has a rich history. In one legend, Paris, the son of the king of Troy, was assigned the task of giving a golden apple to the most beautiful of the Grecian goddesses. He awarded it to Aphrodite, who promised him the love of the enchanting Helen, a decision that lead to the des

Fun Thanksgiving Snacks that Kids love To Eat and Make!

As Thanksgiving draws closer, I started talking to my three-year-old twin daughters about gratitude. When I asked them what they are thankful for they went down the list of family, friends ands toys they appreciate. I had to smile when one hugged the other and said “Sister, I am thankful for you!” Let’s hope these warm feelings last when it is time to decide who tells Santa first what they want for Christmas! To celebrate the season the girls and I made some fun holiday inspi

Figs, native to Asia and the Middle East, thrive in Mediterranean climates, including Southern Italy here fig trees are common along streets and corners. With a short peak season during the end of summer into fall, they are a classic Italian fruit that add a luscious and fresh flavor to any meal. Figs are versatile and can be enjoyed in savory or sweet dishes, pairing well with a smear of mascarpone and a drizzle of honey or wrapped in salty salumi like prosciutto. With the

Get Your Kids in the Kitchen with this Italian Breakfast!

Cooking with young children can be both fun and messy! If you would like to give it a try you will need a few simple kitchen supplies and food items. It is best to start with something simple like scrambled eggs…with an Italian twist! Italian Inspired Scrambled Eggs 6 Eggs 2 Medium Tomatoes 3/4 Cup Shredded Mozzarella Cheese 2 oz of Milk 1 Sprig Fresh Oregano 1 Teaspoon Extra Virgin Olive Oil First, you will need to gather your cooking tools. On a clean counter place a large

While the inventor of the Caesar Salad is controversial, born of Italian American chef in Tijuana, Mexico during Prohibition era, no one can deny it's legacy as one of the most classic salads of all time. The simplicity of the ingredients and preparation of the Caesar salad embodies the essence of Italian cuisine: using quality ingredients that can shine on their own. Especially the use of anchovies, widely popular in Italian cuisine, are often used to add salty, briny flavor 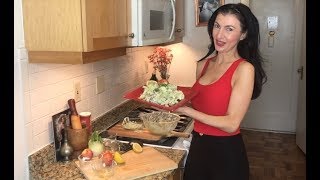 I love adding a healthy, Italian twist to classic dishes--this time it's coleslaw! I make a few healthy swaps, starting with the binder, simply using Greek yogurt and avocado instead of mayonnaise for added protein, heart healthy, omega-3 fats & fiber! I also add an Italian/Mediterranean classic, fennel for added crisp bite with the apple and traditional cabbage. A beautifully colorful side dish to lighten any meal and impress any guest at a party! Ingredients: 1 cup cabbage, 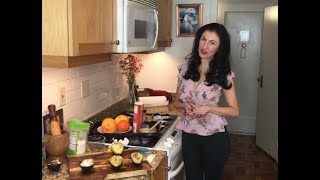 Breakfast doesn't need to be toast or oatmeal! An easy way to get healthy fats in and have a filling delicious meal or snack by creating an avocado bowl that will satisfy and give you a boost of energy. Avocados originate from South Central Mexico and are a staple in the Mexican diet, normally used to make guacamole. Adding a drizzle of lemon juice to an avocado will reduce browning and give a touch of citrus. Avocados can also take on many flavors other than the typical 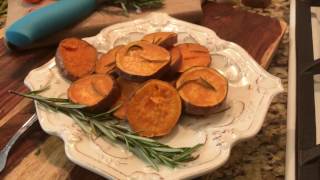 Rosemary is indigenous to the Mediterranean region and is used widely in Italian cuisine. Its fragrance pairs well with garlic and wine, and is perfect when roasting meat, fish, and vegetables. In addition to its uses in the kitchen, this herb has been shown to have powerful anti-inflammatory properties and may also be heart healthy. With its antioxidant power with incredible flavor, rosemary is the perfect addition to your pantry to help you to live in Italian! Ingredients:
1
2345